Jeff Tucker has a nice post on the Mises blog that lauds Pittsburgh. Being a native Pittsburgher, I could not restrain myself from commenting! Below are my thoughts:


"As a native Pittsburgher who left for another state I have to agree with Craig. I would add: 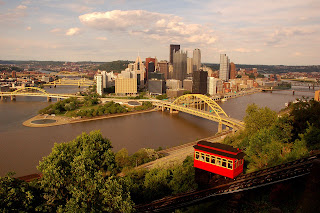 1) The population is older than anything in Florida. There are subsidized old folks homes everywhere, literally.2) The government footprint is huge, at every level, city, county, and state. It grows and grows, and most people see no problem with it.3) The city is about to go bust with its pension liabilities, which are in excess of a billion USD.4) Local politicians are not quite Chicago-like, but they aspire to be. Pittsburgh’s perceived progress has occurred IN SPITE of every effort to cap it by the pols. There are impediments everywhere to commerce that can trace its roots to the meddling local government. They operate in a one party system (Dems only in Pittsburgh). The accidental boy mayor is unpopular, but overwhelmingly re-elected only because he is a Democrat. Good candidates have no chance, and last year’s mayoral election was a prime example of that.5) The union power is extensive. Not only did this power help chase away all of the industry that was in Pittsburgh, it has kept a host of potential new manufacturers out of the city and the the suburbs.6) The infrastructure is one of the most decrepit in all of the US. You can’t drive ten feet without hitting a pothole, and most of the bridges (more than any other city in the world except Venice, Italy) are unsound. The number that failed the testing after the Minneapolis incident was scary!7) There is a tax for just about everything you can think of in Pittsburgh. Income ta, wage tax, beer tax, and my favorite, the “business privilege” tax. In other words, if you are privileged enough to own a business, you owe more. All of the new stadiums were built with taxpayer dollars. Taxes and rates go up every time a government run operation fails to generate revenue (mass transit, etc.).8) The largest landowner after the government is the corporation, University of Pittsburgh Medical Center. They have acquired land on a metastatic scale, and do not pay taxes. The more land they have acquired, the more everyone elses taxes have gone up.9) To emphasize Craig’s point: There is way too much consumption and destruction of wealth, and very little creation.
I could go on and on, but I will stop here. I love Pittsburgh with all my heart, but it is not exactly the ideal economic paradigm. It is the anti-libertarian city in so many ways.
at June 25, 2010