An Austrian In "Wall Street" 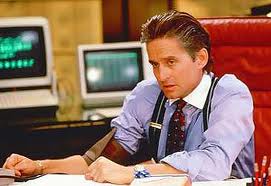 The movies that come out of Hollywood would never overtly be “Austrian in nature.” That being said, every now and then you find an Austrian nugget that seems to redeem a film that would otherwise be an affront to everything Austro-libertarians hold dear. In that light I was re-watching the movie Wall Street, in preparation for the much hyped sequel. In watching it, I re-discovered that the old broker in the office that everyone respected, Lou Mannheim, was an Austrian! When we first see him he says that (emphasis mine):
“..can’t make a buck in this market, country’s going to hell faster than when that son of a bitch Roosevelt was around… too much cheap money sloshing around the world. The biggest mistake we ever made was letting Nixon get off the gold standard…”
A true Austrian could not have said it better!
Special thanks to Lew for posting this comment on his blog!
at September 30, 2010